Sliding doors in cleanrooms - "no go" or "best practice"

In cleanrooms, it is necessary to create a clear demarcation to adjacent, less clean areas. Since the beginning of clean room technology, airlocks have established themselves as an effective means of separating rooms. The doors arranged one behind the other for access to the clean area must not be opened simultaneously in order to maintain the separation of the areas. This arrangement can still be seen as the state of the art in cleanroom technology.

Hinged doors, single or double-leaf with inactive and active leaves, striking plate, hinges and handle sets are the most frequently used doors in cleanrooms. But often undetected risks are concealed here:

The retractable bottom seal (Figure 1) in hinged door leaves, which is often desired and installed because of the higher sealing tightness, does not meet the requirement for easy accessibility for cleaning. In the door leaf, an uncontrolled dead space results from the use of the seal, which is open at the end faces of the door leaf and allows cleaning only when the door leaf is removed.

A retractable bottom seal (Figure 1) in hinged door leaves is often requested and installed because of the higher sealing tightness, however it is not easy-to-clean. The seal results in an uncontrolled dead space in the door leaf, which is open at the end faces of the door and permits cleaning only when the door leaf is removed. 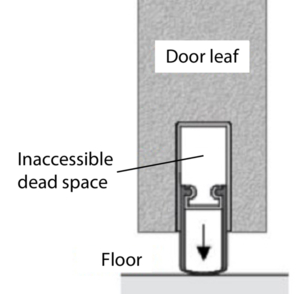 A further risk is concealed in the locking mechanism of the doors. The fixtures including bolt, latch, door locks and the hinges are often overlooked as weak points. Most doors here have uncontrolled and hard to clean openings (striking plate open towards the entire door frame). Monoblock systems often offer the possibility of integrating door closers into the panel. These are not visible from the outside, but replacement should be possible.

Manual opening of a hinged door creates a high air turbulence (depending on the opening speed of the door) which causes uncontrolled air exchange between adjacent rooms of different cleanroom classes. In order to enable smooth and steady closing and thus avoid the disadvantages mentioned above, cleanroom doors can be equipped with drives for automatic opening by sensors or by manual control units and also including door closers. The suitability of the drive for use in a clean room should be proven (e.g. suitability test by an independent institute). The safety requirements of the European harmonized product standard EN 13241 must be complied with. Thresholds or stop rails on the floor are not recommended.

Sliding doors as a solution to the problem?

In view of the risks and disadvantages mentioned above, the question inevitably arises as to whether sliding doors are a sensible and GMP-compliant alternative to the hinged doors normally used. With regard to sliding doors, Annex 1 of the EU GMP Guide recommends the following:

„To reduce accumulation of dust and to facilitate cleaning there should be no un-cleanable recesses and a minimum of projecting ledges, shelves, cupboard and equipment. Doors should be designed to avoid those uncleanable recesses; sliding doors may be undesirable for this reason.”

The word selection in the German translation of the text “sliding doors may be undesirable” was somewhat harsher than the original English intent, which in the past has led to a general distaste for sliding doors in GMP environments there, as it was interpreted that “sliding doors are not permitted”. Practical inspection experience has shown that in most cases sliding doors as well as high-speed rollup doors are accepted by the agencies for cleanroom applications. 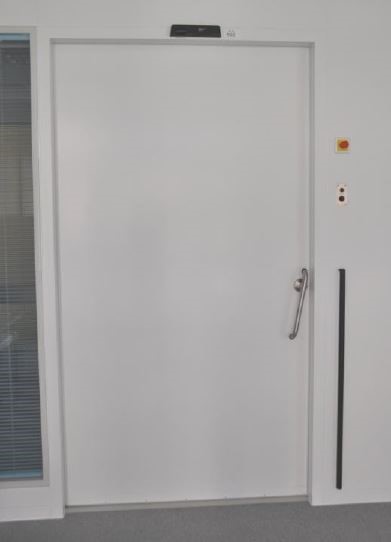 Analogously, the same recommendations apply for so-called high-speed doors (Figure 3), which roll up in the vertical direction to open and close. 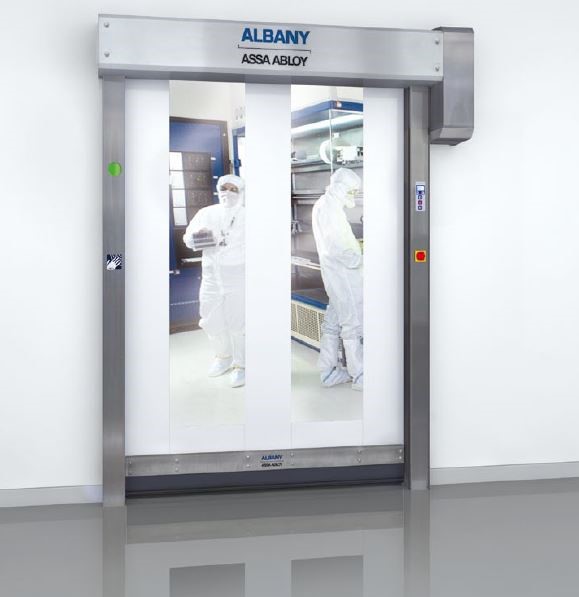 The following requirements are placed to achieve a GMP-compliant motorized or mechanical drive design:

The following safety aspects should be considered or installed

In view of the considerable advantages offered by sliding doors in clean rooms, this alternative should be considered more often in practice.

Do you know the legal requirements to be considered when selecting suitable components for pharmaceutical production? Are you interested in new technologies for planning? And would you like to get an overview of the state of the art for wall and ceiling systems, windows and doors as well as floor systems?

The Chapter 3.E is also available as a GMP-Series e-book A Pharma Guide to Planning and Constructing Cleanrooms.

This text is a shortened and edited excerpt from the GMP Compliance Adviser, Chapter 3.E "Cleanroom Construction Components" Our recommendations
A Pharma Guide to Planning and Constructing Cleanrooms