In our company, every step of the production process is documented on the batch processing record, which is printed out on paper beforehand. Prior to this, all batches used were entered in the record by hand. This often resulted in an unclear spelling. In order to improve the documentation, it was suggested that the batches be written on the computer. From a GMP point of view, is it correct that the batch designation on the batch processing records is written on the computer instead of handwritten?

This question, which at first glance seems simple, turns out to be quite tricky at second glance, because it all depends on the details. We have compiled three detailed answers to this question - directly from the editorial office, from the perspective of a GMP inspector and a QA manager.

According to our editor Doris Borchert the crux of the matter is that an approved manufacturing instruction is required before production can begin. All batch-specific data are usually entered in these instructions - including the batch numbers of the starting materials used.

This answer is in line with the view of the GMP inspector, who writes the following on the subject:

Since most companies use appropriate enterprise resource planning systems (ERP systems), the manufacturing instruction usually includes an order-specific bill of material (BOM) created on the basis of the released general BOM. The BOM should contain the quantities of the individual components adapted to the order size as well as the batch numbers of the components to be used. This exists in production, but also in packaging. Usually this document documents that the specified batches have been used, e.g. by the employee of the weighing centre.

The procedure would be as follows:

Both answers confirm that the batch numbers can be preset (and thus entered on the PC), provided that the conformity of the batch used with the preset batch number is confirmed again during processing.

The answer of the head of a QA, however, shows a different view of the problem. The proposed solutions are not only interesting but also close to practice. Here is the comment: If one assumes that the starting materials or intermediate products are to be further processed and that the manufacturing documentation is purely paper-based, the first question arises directly whether the allocation of the batches is not carried out directly in advance (i.e. before the actual use). This would be a specification that is selected, for example, via an ERP system using FeFo (First Expired – First Out) or direct assignment. If this material is then made available for processing, the selection has already been made. The ERP system, warehouse management system (WMS), etc. would then be decisive here. Since the information for the specific staging for processing (usually not all materials or batches are freely accessible for production but somewhere in a storage area) must also be transported, a first document could be created from this system (and also used for staging). In a subsequent step, these batch descriptions can be displayed either from the weighing and dispensing system (if it exists there, it probably does not exist here) or via the documentation from the ERP system, WMS, etc. If the weighing process is involved, then printouts of the scales should also be available in some form as proof. In this case, it would be possible to output this via the weighing terminals and printers. This also works with rather simple weighing terminals. In any case, a default page - regardless of whether it is generated manually or from a valid system - should be generated and authorized in a correspondingly traceable manner.

The batch numbers should not be entered in the "Word" document at file level and thus in the (approved) specification document, as the unchangeability, correctness, completeness, etc. of the batch numbers is not guaranteed. ALCOA would have to be questioned here. Although some "work-arounds" would be possible to solve this technically, this seems to be handled rather simply and directly in the present case.

So, if the batch numbers are to be entered in the record and this cannot be solved technically cleanly (here it was not about efficiency but only about readability), I would try to design the template document in such a way that illegibilities can be minimized by design. This often has to do with field sizes that are too small, imprecise specifications for registration (suggestion: boxes or similar per figure or letter, as in the case of a bank transfer form, for example). Furthermore, the question must also be answered as to whether the workstation for registration is actually suitable for storing and editing the document in a meaningful way. This too is sometimes found and leads to problems. 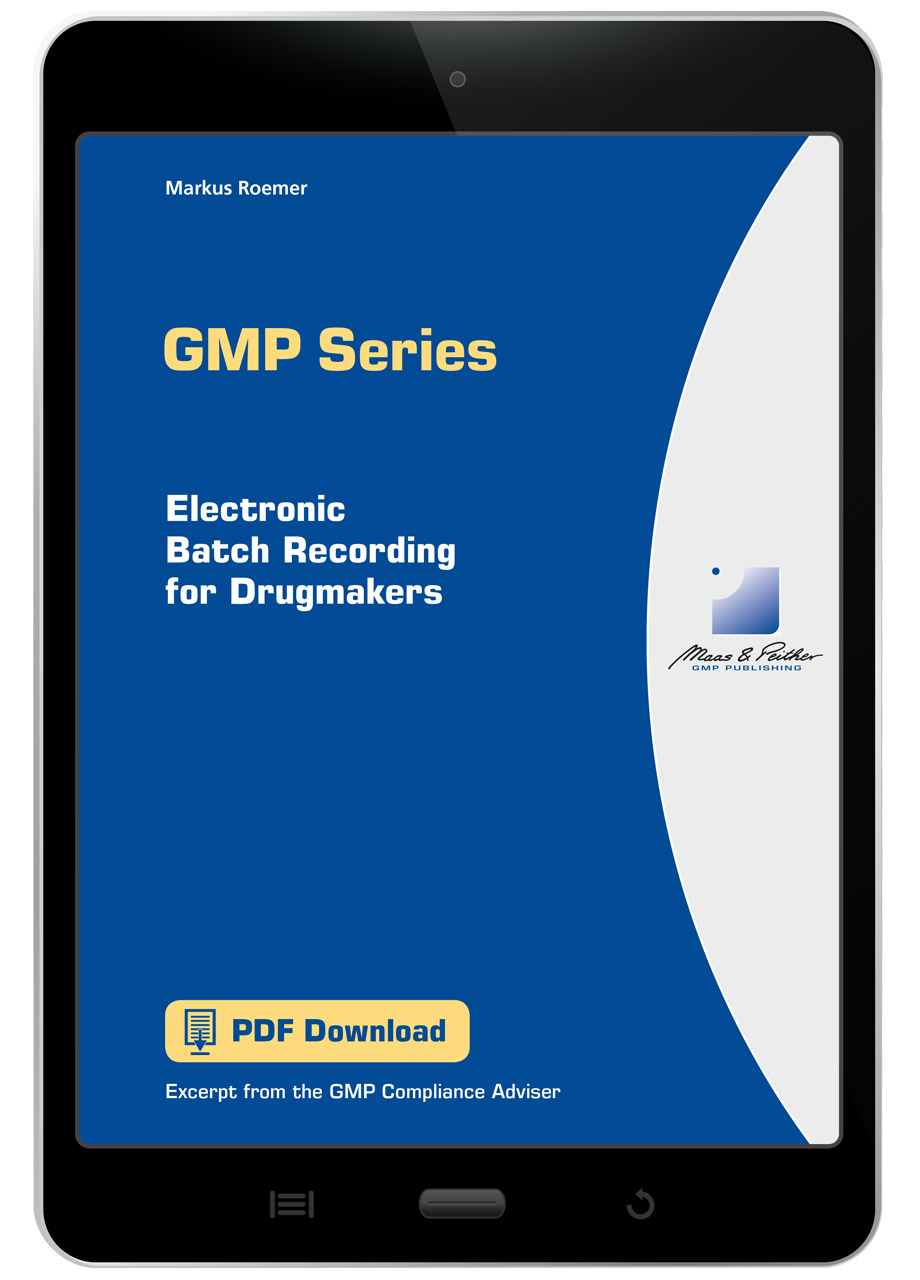 Order now your copy of Electronic Batch Recording for Drugmakers