To assist pharmaceutical manufacturers and distributors to understand the areas where good manufacturing practice (GMP) inspectors have found compliance problems during GMP inspections in the UK and overseas, the UK Medicines and Healthcare Products Regulatory Agency (MHRA) GMP  Inspectorate has issued data, during October 2019, relating to common deficiencies from previous GMP inspections conducted during 2018 [1]. While the anonymised raw data provided by the GMP Inspectorate is of general interest, additional analysis is required to draw meaningful inferences. In this article, the data has been reviewed and presented, in order to obtain an overview of key trends.

Based on a review of critical and major deficiencies, pharmaceutical manufacturers need be most concerned about the following.

These represent the common trends for the year 2018 among over 6000 citations across almost 300 inspections, and provide focal points for driving internal improvements. In general, sterile manufacturers receive a far greater number of deficiencies compared with non-sterile manufacturers.

The MHRA conducts product-related GMP inspections when assessing an application for a UK marketing authorisation. Site visits invariably include each part of the facility or process involved in producing, purchasing and distributing medicines, including the following.

During the inspection, observations are made, many of which are then assessed as deficiencies according to European Medicines Agency (EMA) requirements. Deficiencies are classified as follows [2].

This is a deficiency which includes at least one of the following.

Other
A deficiency which cannot be classified as either critical or major. During the time period, the MHRA inspected pharmaceutical facilities in Bangladesh, China, India, Japan, South Korea, Singapore, UK and USA. The majority of the inspections were, unsurprisingly, conducted in the UK (see Table 1).

The list of countries can be interpreted in different ways. The list could reflect the main manufacturing or distribution areas for medicinal products coming into (or from within) the UK; or the list could reflect the relative risk of different manufacturers in different countries (hence India could be seen as presenting a relatively high risk); or the overseas list may simply reflect companies in one country being grouped together for convenience so that inspectors need only take fewer trips. Perhaps the relative risk aspect is the most likely, given the average number of findings per inspection (see Figure 2).

Korea has the highest mean number of findings per country. This is somewhat distorted by only one company having been audited. Perhaps a more meaningful statistic can be drawn by a comparison where a sizeable number of inspections have beenundertaken, as between India (average of 33  findings per company) compared with the UK (average of 19 findings). This may reflect the relative maturity of pharmaceutical processing in both countries. In terms of the categorisation of the deficiencies, the majority were ‘others’ (a category that is often, incorrectly, considered to be ‘minor’ – however, all that ‘other’ infers is that there was insufficient evidence found by the inspectorate to turn the observation into a ‘major’. Hence ‘other’ serves as a warning to  the company to look deep into its internal procedures and processes. The breakdown according to inspection category is shown in Figure 3. Figure 3: MHRA deficiencies by category – critical, major and other.

The relative risks surrounding sterile manufacturing are such that of the 286 inspections, 225 were of nonsterile facilities. These non-sterile facilities accounted for 33% of the observations – an average of nine deficiencies per facility. In contrast, of the 286 inspections, 61 were of sterile manufacturers. These manufacturers accounted for 67% of the observations, or 67 deficiencies per manufacturer. The risk profile is therefore heavily skewed towards sterile production. Figure 4. Number of MHRA observations, between sterile and non-sterile manufacturers.

Breakdown by EU Guidelines to GMP Chapter or Annex

The data provides a breakdown of the number of deficiencies according to the chapters that comprise the EU Guidelines to GMP together with the Annexes3. Table 2 provides a breakdown of the chapters, and it can be seen that the most common  deficiencies relate to the pharmaceutical quality system; this is followed by documentation (a category that can additionally include some issues relating to data integrity); followed by production and premises, and then quality control. The pie-chart in Figure 5 gives an idea of theproportion of observations relating to each chapter. The pie-chart more clearly shows that around onethird of observations are linked to the quality system, and when combined with documentation, these two chapters account for close to half of all inspection findings. Examination of critical and major findings

The 142 critical findings according to the EU Guidelines to GMP are shown in Figure 6. As the chart indicates, 38% of the critical observations related to EU Guidelines to GMP Chapter 1. This is the same across the categories of ‘major’ and ‘other’, and the data reviewed earlier already points to concerns with the pharmaceutical quality system. The second mostcommon category is Annex 1. This is a more interesting figure, since it indicates that Annex 1 deficiencies are more likely to lead to a critical observation and this again emphasises the concerns around  sterile products manufacturing in terms of relative risk. Other EU Guidelines to GMP chapters and Annexes score relatively lower. Figure 6. Breakdown of EU GMP critical deficiencies according to EU Guidelines to GMP.

Drilling down the data further (and by crossreferencing to the relevant parts of the EU Guidelines to GMP3), with Annex 1 deficiencies the clauses that were cited most frequently are as follows.

Hence, the two most common Annex 1 deficiencies leading to critical observations relate to microbiological practices. Regarding Chapter 1 of the EU Guidelines to GMP, the following were the top two (by some margin).

The two most common areas relate to process monitoring and with conducting adequate investigations into deviations, especially relating to root cause analysis. With this latter point, there is a connection to one of the Annex 1 ‘top two’ – investigating microbiological excursions.

For the major findings, the breakdown in relation to the applicable part of the EU Guidelines to GMP is shown in Figure 7. The chart indicates, consistent with the above findings, that Chapter 1 accounts for the greatest number of reported deficiencies. Following this comes Annexes 1 and 15, and Chapter 5.

The two most commonly cited clauses of Chapter 1 are as follows.

Of these, 1.4(viii) occurs frequently as a critical observation. The other clause relates to quality risk management and this is a regulatory hot-topic. Close behind these two clauses is 1.4(xiii) which covers change controls. The top two most commonly cited parts of Annex 1 are as follows.

The reference to the way that environmental monitoring is conducted matches the critical observation. The second most common Annex 1 finding is in relation to contamination control. This will become an even bigger focal point when the revised Annex 1 is finally issued [4]. In relation to the critical  observations, A1.20 – “Investigating environmental monitoring excursions” comes out relatively high. The top two clauses of Annex 15 are as follows.

Both relate to cleaning, the first to the validation of cleaning and the second to the consistency and  controls around manual cleaning. Finally, the following three clauses of Chapter 5 were top.

Considering these, it is interesting to note that quality risk management again  features, linking back to Chapter 1. With the other two, both relate to contamination control, which again links back to one of the main Chapter 1 observations and one of the central updates that will feature in the revised Annex 1. Figure 7. Breakdown of EU GMP major deficiencies according to EU Guidelines to GMP

The raw data supplied by the MHRA [1] is considerable and countless hours can be spent analysing the trends in ways of greater value to different manufacturers in different locales with different concerns. The aim of this article was to draw out some key themes from the data. Tying the information together, the  key trends are deficiencies in the following.

The data also suggests that bigger issues are faced by sterile products manufacturers compared with producers of non-sterile products. While these data are interesting, it must be noted that the data represents only a snapshot in time (given that this is the first time that the MHRA has provided raw data in  this format). This limits the assessment of trends and significant shifts – are citations relating to sterile products manufacturers increasing or decreasing? This type of question cannot be answered based on these figures alone. Nevertheless, the data does give some pointers as to the types of areas that GMP
inspectors are either looking more closely into (or at least finding sufficient evidence of non-conformity). Hopefully, the MHRA will produce future data so that longer-term trends can be ascertained. In the meantime, pharmaceutical manufacturers should be assessing their pharmaceutical quality system  against the key issues highlighted in this article.

This article, “MHRA: Feedback from GMP inspections”, is reproduced from a recent issue of gmp review, a quarterly journal researched and edited by an expert team experienced in all aspects of pharmaceutical manufacturing and control. 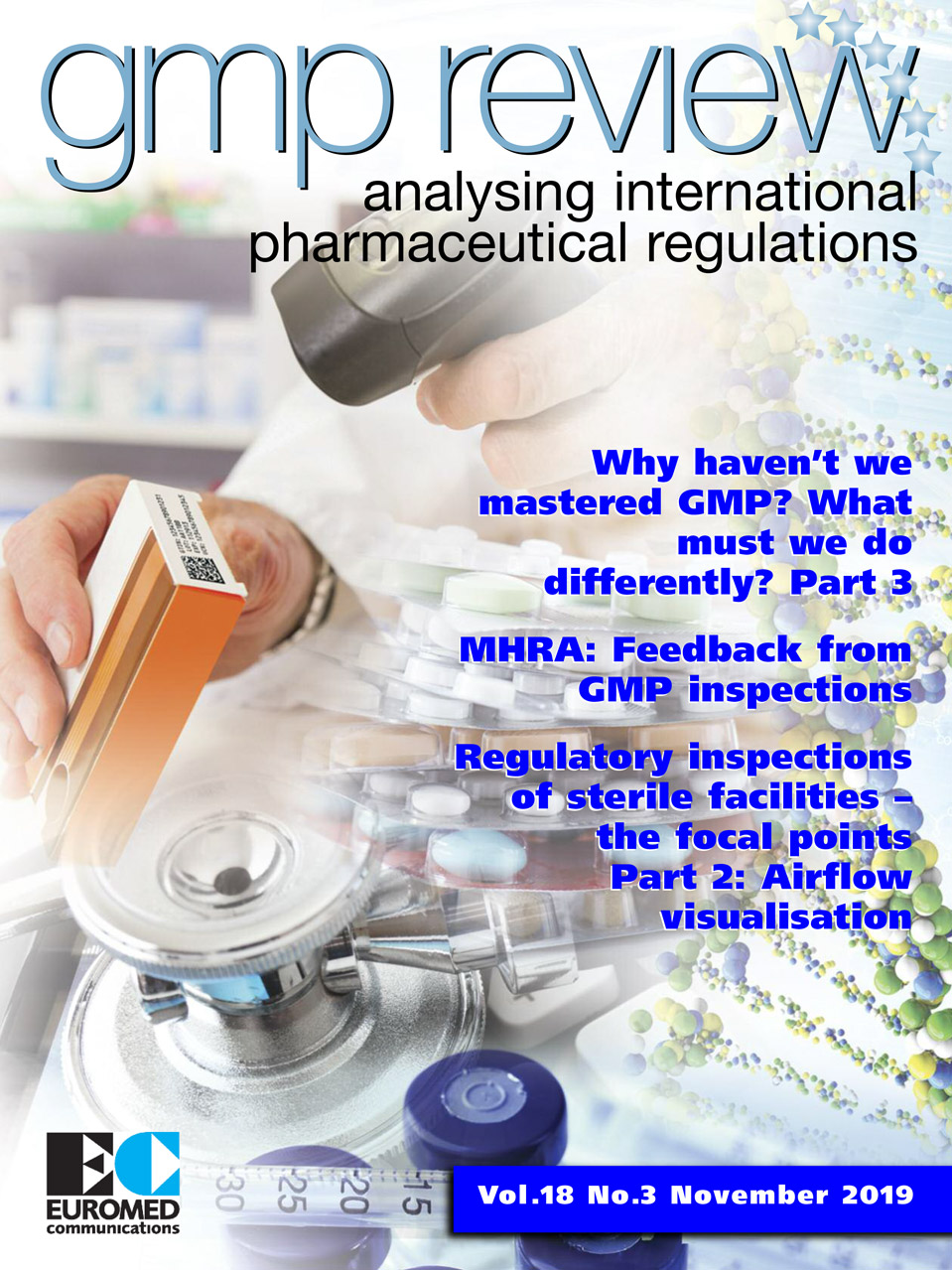 gmp review keeps readers up to date on the latest Directives, Regulations and Guidelines applicable to the pharmaceutical industry from the FDA, EU, CPMP and ICH positions. Each item comes with analysis and comment on its effect on your company. The dry legal jargon is made understandable to you and your colleagues in manufacturing and quality. As such gmp review is the perfect companion to the GMP Compliance Adviser and will help provide further useful commentary on the new regulations.

If you are involved in any aspect of GMP then gmp review will provide much needed information and analysis in a convenient quarterly journal format. gmp review subscribers will also receive gmp-review news a monthly news service to keep you up-to-date on new developments in GMP and associated regulations.

For further information on the gmp review please click here.